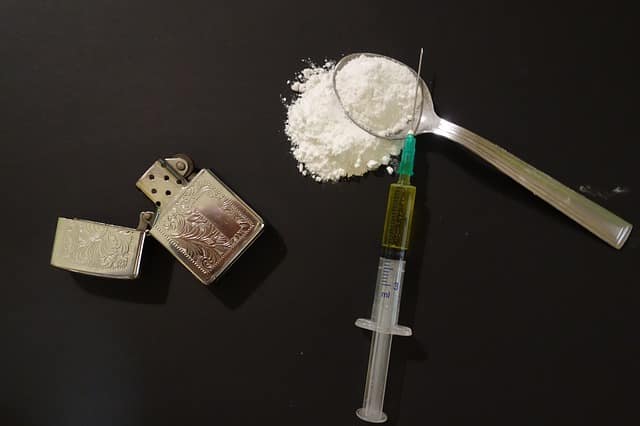 Heroin is a drug made from morphine, which itself comes from the opium poppy. Morphine is often used as a strong painkiller in hospitals, but heroin is up to 3 times as strong and causes an intense feeling of euphoria or contentment, making it a popular drug for people who are dealing with extreme troubles they want to be able to forget about from time to time such as homelessness.

It is one of the most dangerous and addictive of all of the illegal drugs, and heroin addiction is an incredibly dangerous and debilitating disease.

This is also the drug that causes the most deaths outside of alcohol, both in the UK and worldwide. The substance is so addictive that it’s almost impossible to quit using it alone. Luckily there is no reason you can’t kick the habit with the appropriate help, however.

Whereas some drugs such as cannabis are only psychologically addictive, heroin is physically addictive. This means that the brain gets accustomed to the presence of heroin and begins to become unable to function normally without it. This leads to an extreme dependence with cravings and withdrawal symptoms appearing more quickly and having a stronger effect than with any other drug.

Regular heroin use also leads to increased tolerance, which essentially means the body gets used to the effects of heroin and so addicts need to use more and more in order to experience the same euphoric feeling. This is one of the leading causes of heroin overdose and means the probability of death from overdose increases the longer a person uses the drug.

Despite the above, heroin still causes psychological dependency too and it creates a warm, sleepy and content feeling that users will quickly become “unable” to live without. Most heroin addicts will prioritise their drug use over anything including relationships, jobs and loved ones, to the point that their life will revolve around its use and finding the funds to secure more heroin, and little to nothing else.

But how do you spot if somebody you know is addicted to heroin?

The symptoms of heroin addiction often include:

Heroin overdoses lead to shallow breathing and loss of consciousness, which can become death within minutes if the appropriate medical help isn’t available.

There is also further emotional, personal and physical damage that can be caused by heroin use, including:

For a long time until very recently, doctors were completely powerless to help somebody going through a heroin overdose, with the only course of treatment being to put them on a drip and watch them hoping they would wake up.

Nowadays there is a drug called naloxone which can combat the symptoms of shallow breathing when a patient overdoses from heroin. While this increases chances of survival and has saved countless lives since it came into use, it is far from a guarantee and heroin overdose remains the most dangerous thing that can come from drug use of any kind.

The most effective treatment plan for heroin dependency is a combination of:

There a variety of different treatment methods depending on the current health and heroin abuse history of the patient. Detoxing from heroin can take up to 12 weeks making it a gruelling experience but a necessary one.

Withdrawal from heroin is more severe than any other form of withdrawal, including alcohol it typically takes between 4 and 10 days depending on the regularity of use.

Symptoms start off very soon after stopping heroin use and begin with:

Later on in the withdrawal process, these can become:

More than is the case with any other drug or disease, if you or a loved one are dependent on heroin, you need medical help as soon as possible. If you are unable to afford a rehab clinic financially or in terms of time away from home, you will be glad to here we offer some of the most effective Heroin Detox from Home treatment plans.

This allows you to overcome your addiction from the comfort of your own home while experiencing all of the support, supervision and medical attention you would experience while attending a rehab clinic.

This is the lowest priced and most effective way to overcome heroin addiction without attending a long term inpatient facility, period.

Call us now on 0333 444 0315 or use our Contact Page to get free, no-obligation advice on your heroin dependency and the best way to treat it!